I became aware of someone standing next to my head, not sure if it was the rustle of clothes or the faint aroma of body warmth.  I was feeling snug, that warm, comforting feeling that you don't really want to disturb.  As I started to open my eyes I heard a female voice express one of those clichés, something along the lines of "Glad to see your back with us".  There was some conversation going on around me as I came too, I don't recall forcing myself awake, just let it happen at it's own pace.  I became aware that it was Friday, not that I was in the least concerned at that point in time.  There were several other things that I became aware of, like it had been a close run battle and Monitoring had been reduced in time scale to 15 minute intervals, not that I can recall if they were spoken directly to me. There was also the matter of the hospital conversing with a disease unit in Cambridge, who in turn spoke to somewhere in America who would suggest the next blood test to be done, no wonder they took so much.  The ward doctor came and asked a series of questions that I tried to answer as best I could but can not recall what, all I was interested in was one of my own.  "I hear it was close, how close?" I asked, to my disappointment I did not get an answer, more of a knowing look as he went into further questions.  I was not aware then, and would not find out for many months after that I had been unconscious for about 48 hours.


I was fairly well plumbed in, nasal tube to stomach, urethral tube to bladder, cannula to veins.  Apparently after a short while I didn't need oxygen.  Indeed it appears the virus had completely bypassed my lungs.  This left the medical team in something of a quandary as the virus was not following it usual method of attacking the body, causing them to phone pathology on several occasions to confirm the diagnosis, and raising something of a laugh with my family by asking what type of sport I did. Me, a sportsman! made me smile when I heard that one.


There were some pills and one of those 'fizzy' drinks to be had because I was still constipated, there was also the matter of an injection.  This was because I was still bed-bound.  Nurse Sue gave me a choice, thigh or stomach, thigh seemed complicated what with moving bedsheets and PJ's, and I was aware stomach injections could be painful.  What I wasn't aware of was my brain couldn't follow rational thought through to a decision, I just replied along the lines of wherever is easiest.  Nurse Sue looked at me and asked again, more pointedly and I said stomach, not as a decisive choice but because it was an answer.    The injection was nowhere near as painful as I was expecting, indeed I hardly felt a thing, but at that time I was still being pumped full of drugs.  The next thing to deal with was removal of the nasal tube which, anticipating that gagging feeling as it came up the throat, was done with relative ease.  The tea trolley arrived, and I could not think of anything more welcome in my life at that moment, I just had to make sure the tea was not over milked.  The arrival of the tea trolley would become the most anticipated highlight of my stay as the days seeming rolled into one long on and off consciousness, with a few moments that I could not pin down to any day.


One day I was eating a meal when the nurse entered the room, looking over to greet them I was scolded.  "You promised me you would take that tablet", Taken aback I looked to the bed table to see a tablet quietly resting there.  I had no idea how or when it had got there, I had thoughts of it being sneaked in to mess with my head, but couldn't tell how it came to be, so I apologised and promised to take it when I finished eating.  Then it struck me that was what I was supposed to have done before and decided to take it there and then.  This was not the only incident that seemed odd but I struggled to give it more than a shallow thought, but there was more humiliating moments to come.


Having been unhooked from the urethral tube I had to use the disposable bottles, however the quantities needed recording.  I duly filled the first one and went in search of the sluice room.  I was intercepted by a nurse who took me there and showed me the register.  On the wall was a list of weights for each receptacle, all I had to do was find the gross weight and work out the net contents. It was only a matter of so many hundreds grams minus some less, struggle as I did I couldn't do it.  I turned to the nurse and said I would need to write it out, from somewhere a pen and paper appeared, and I proceeded.  I still couldn't do this.  I checked again, large figure on top, small below, but still it eluded me.  This was not maths, I could do maths, I helped my children do their homework.  This was subtraction, basic arithmetic, and yet I stared numbly at the figures on the paper.  As a consequence, after that, I just labelled any further containers with the bed and room number and a note to be weighed & recorded.  Yet I still had not put things together as to what had happened to me and what the future might hold.


Feeling thirsty I approached the duty nurse and asked for the kitchen, she pointed and asked me why,and I said I really wanted another tea. I knew they were busy and not wanting to distract them I could just get my own.  I was told, firmly, that I could not do this but if I wanted one all I had to do was ask. I had played the tea trolley game for so long It never occurred to me in all the time I had been there that I could have just asked.  I gladly accepted but felt like weeping at this revelation. 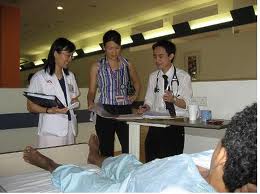 On another occasion a doctor on rounds, with two students in tow, asked me if I knew what the day/date was.  I gave it some thought and answered, quite honestly that I didn't. "Try!" she replied firmly, and almost like old machinery cranking into life I started to try work things back, then realised something was wrong, I had missed some days and had to recalculate it all again.  I reached a position where I had narrowed down to a Wednesday or Thursday, and twenty something or other, not wanting to look any-more slower than I felt I just took a guess at which day and date.  I was never told if I was right or wrong, they just nodded and disappeared.


There were some other incidents but I can not recall, I'm just aware more events happened before I was discharged, it was not until later that I would really start to find out what I could and could no longer do.  In some respects it was like being an alien, observing while the world went on around me, all the time waiting for the next tea trolley because by then I had forgotten about being told to just go and ask.

Posted by Lorraine and Richard at 21:12